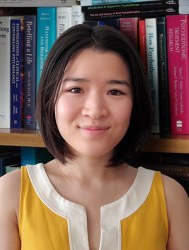 Haruka is a third-year graduate student in the Clinical Psychology Program. She was born in Japan and grew up in Shanghai, China. She received her B.A. in Psychology with honors from Wellesley College in 2015. Afterwards, she worked as an intern and then short-term staff on a hospital’s psychiatric unit in Japan. She then joined Golden Bear Sleep and Mood Research Clinic at UC Berkeley where she was on a transdiagonostic treatment development team. Haruka is interested in the role of personality in psychotherapy. She hopes the research around those issues will ultimately inform treatment of a broader range of disorders. In her free time Haruka enjoys climbing, slackline and watching musicals.